Helena Attlee has written one the best books I have read this year: “The Land Where Lemons Grow” published by Particular Books at a cover price of £20. This is much, much more than piece of horticultural history and is really a portal to the entire Mediterranean world and in particular to the agglomeration of cultures, cuisines and histories that has now become Italy. The title comes from Goethe’s The Apprenticeship of Wilhelm Meister; where Mignon, the daughter of a wandering musician sings “Kennst du das Land, wo die Zitronen blühn” simply translatable as “Do you know the land where lemons bloom?” The line encapsulates the slightly sinister beauty and warmth of Italy and its lure for the more frigid civilisations of the north.

This attraction is something we all feel in winter. Visiting RHS Wisley gardens this New Year’s Day it was so cold, so dark and so horribly dank that I fled into the warmth of the citrus collection in the glasshouses. The intensity of the orange and lemon blossom was overpowering and it was easy to feel the magic that has attracted generations of English and Germans to the Riviera and the Amalfi Coast as well as Sicily. Equally one can understand the drive to create the orangeries and hothouses where these then exotic species could bloom and fruit.

Helena Attlee is a distinguished garden writer and leads tours round many Italy’s best historic gardens. In this book however she moves well beyond horticulture alone, although her obvious expertise in this area informs the whole text. Attlee’s book encompasses not only history and horticulture but mythology, biology, sociology, cooking (with some excellent recipes), perfumery, the story of taste and architecture and Italy’s contentious politics (mafia included), as well as numerous visits she has made to the once great cultivation sites of the various citrus fruits the country contains.

Attlee goes into the minute details of the people and places she visits on her journey of discovery whilst never losing sight of the symbolic importance of citrus fruits as a whole and as symbols of the warm world of our imaginations and desires. She ties them in to the contexts of both the mythologies once associated with them and those we have more recently created around them.
She explains how, via trade and invading Arabs, the citrus fruits reached Spain and then Sicily and elsewhere in the country from their far off origins in the Himalayas, Burma, northern India, the Malay Archipelago and China. She describes how they subsequently interbred promiscuously to provide the varieties of citrus now cultivated. She discusses the origins and cultivation of lemons, oranges, bergamots, the chinotto, clementines, tangerines and the fabulous but strange citron whose perfect fruits will sell for several hundred dollars as an essential component of the Lubavicher Jewish Sukkoth feast. 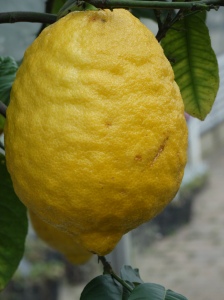 Amongst the many fascinating stories she tells is the tale of citrus’ role in the prevention of scurvy amongst sailors through the daily consumption of lemon juice. The Admiralty does not emerge covered in glory from this, although there is no reason to believe its intentions were not good. It took some forty years to act after a controlled clinical trial by a naval surgeon, James Lind, in 1747 conclusively proved lemon juice’s effectiveness. Even then, by eventually substituting lime juice in the mid 19th century, storing it in open vats and passing it through copper piping to be dispensed to the sailors, much of the reduced quantity of vitamin C the limes contained was effectively destroyed. In the eighteenth century the nouns applicable to citrus fruits were commonly interchangeable and lemons were frequently referred to as limes. Hence the area containing the docks where the navy’s lemons were landed from Sicily and Malta was referred to as Limehouse. I at least never knew before I read this book.

Throughout the book, Attlee weaves in events from the wider world. When the Arabs brought lemons and sour oranges to Sicily after they invaded in AD 831 they brought with them all forms of science and technology, including sophisticated water storage and irrigation systems that were used to extend and repair the original and dilapidated Roman aqueducts.

As the book makes clear, the cultivation of citrus fruits needs extensive knowledge, skill, resource and time. Since it tends to be capital intensive it is always liable to exploitation from those with the power to manipulate markets and intimidate the smaller growers. Helena Attlee does not shrink from exposing the ways in which the Mafia in Sicily (primarily a nineteenth century organisation in its origins that included many aristocrats, prelates and prosperous merchants as well as bandits and ruffians) murdered, bullied, corrupted and intimidated small growers and producers to gain control of the trade. She likewise discusses role of that other criminal infrastructure, the ‘ndrangheta, in Calabria.

Yet she never loses sight of the sheer sensuous beauty of the trees, their blossom and their fruit. You get an intense feeling for the local and the specific as she, for example, visits a small factory extracting essential oils from bergamots in Calabria which are used in perfumery and medicine. At the end of the visit the owner, Annunziato Bova, tells her how proud he is of what he does and then, generously and inexplicably, presses into her hand a small and very valuable bottle of golden green oil.

Finally the book contains a number of interesting recipes placed in boxes throughout the text. These include tagliolini with orange and lemon, an Arabic recipe for lamb with sour oranges and spices and, as something of an historical curiosity, one for tortoise pie made with a real tortoise.

This is a book really worth reading, and buying. If you do decide to buy, although it is widely available, please consider getting it from your local independent bookseller. We will miss them if they go.