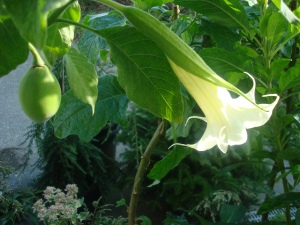 Andrea Wulf’s “The Brother Gardeners” (Heinemann) appeared in 2008, but is still well worth buying. Indeed it makes near-essential reading for anyone interested in the origins of many of the trees and plants we today take for granted. She points out the range of plants available to gardeners in the early eighteenth century was relatively limited and “it is perhaps difficult to imagine just how dull and dreary the late seventeenth – and early eighteenth century garden looked for at least five months of the year”.

It is hard to realise just how much we owe to the “Brother Gardeners” she describes. They formed an international network of collectors, merchants, nurserymen, learned institutions, ordinary garden owners and the rich and famous.

Her book focuses on the period from 1734 to the end of the eighteenth century and concentrates on six men in particular. These are the London cloth merchant and passionate gardener Peter Collinson who worked closely with the Philadelphia farmer and plant collector John Bartram. Philip Miller at the Chelsea Physic Garden was responsible for enormous practical advances in propagating new plants, despite a tense relationship with the Swedish taxonomist Carl Linnaeus. Linnaeus’s one-time protégé Daniel Solander eventually transferred his loyalties, until his untimely death in 1782, to the rich aristocrat Sir Joshua Banks.

Banks, in turn, a passionate botanist and skilled organiser, rose to be central figure in plant collecting and exploration, willingly paying £10,000 so he and his staff could accompany Captain Cook on his voyage to the Southern Hemisphere from 1768 to 1771. His energies and activities drove the discovery and introduction of new species from the Pacific and South Africa in particular; he remained at the centre of all things horticultural until his death in 1820. A man of immense charm and application, he clearly had a great gift for friendship as well as organisation. This didn’t prevent him taking a firm line with his collectors where, Wulf informs us “Banks liked to remind the collectors they should not travel as gentlemen but as servants, and in general he preferred to employ Scottish collectors for their ‘habits of industry, attention and Frugality’.”

The Brother Gardeners’ lives and activities were woven together, despite conflicts of personality and background, to transcend class, geography, politics and war in furtherance of a passion for plants and a taste for gardening. All their arguments, quarrels and entertainment aside; botany and gardening have benefitted from so many of the plants we take for granted today. By the end of the century scientific principles of classification, breeding and propagation were well established and driving the pursuit of botany. Very many of the plants we know today had by then been brought into this country by collectors, nurserymen, scientist and a network of trade and discovery hardly imaginable eighty years before 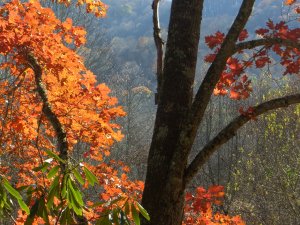 Plants either introduced or previously only infrequently available but brought into common usage, during the period covered by the book, include trees such as the red oak, tulip tree, black walnut, monkey puzzle and numerous birches and firs. Shrubs and smaller trees included stag’s horn sumach, many magnolias, viburnums, brugmansias (angels’ trumpets) and catalpas; while flowers such as rudbeckias, Campsis radicans, fuchsias and nerines were all either introduced or made freely available at this time. The images in this post are all of plants introduced or made generally available during the period the book covers (all are ex Wikipedia Commons); they show Brugmansia arborea-introduced in 1733, Campis radicans-introduced in 1640 but very scarce until propogated for everyday use by Collinson and Miller; and the Scarlet Oak, Quercus coccinea, whose acorns were collected and shipped in quantity to the UK by John Bartram over four decades. 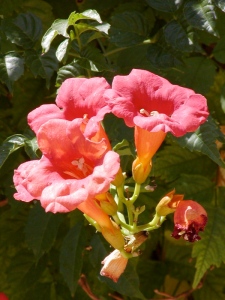 Wulf’s book is strong not only on what was introduced when, but just as interestingly, on the difficulties, personality clashes and complexities of finding and introducing new species. She is excellent at describing this tension and especially the evolving relationship between Peter Collinson and his plant collector John Bartram. Collinson was not only a successful and very prosperous cloth merchant but also a passionate amateur botanist. He was elected a Fellow of the Royal Society and he was the confidante and intimate of plant collecting aristocrats such as Lord Petre and the Duke of Richmond. As Bartram’s knowledge grew Collinson was gradually obliged, despite an acute awareness of his own social position, to treat him as more of an equal and to recognise his importance and abilities in supplying the plants that were so in demand.

As usual we would encourage you to consider buying this book from your local independent bookseller, who you might miss should it disappear.