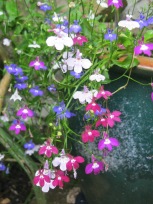 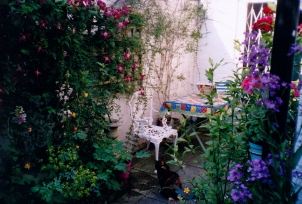 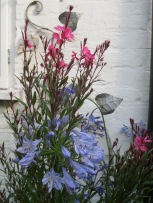 I have just read a post on Sometimes Gardening by Lucy Masters where she writes about the theory that the way to keep ageing at bay is to constantly disrupt the patterns of your life; read different books, listen to different music and plant flowers you’ve never considered before, in her case Cannas.

As a general rule, I dislike change. Naturally I veer towards the same authors (Monty Don and Iris Murdoch), listen to the same music (Baroque and the Beatles) and embrace new technology very grudgingly, as Chris will affirm. Each summer I grow the same flowers based round a palette of pinks and purples; cosmos, gaura, verbena, sweet peas and trailing lobelia are the mainstays of the garden every year. I am trying to convince myself that these are the plants that are suitable for the conditions I have, but there are masses of yellow and orange flowers that would do just as well, or even red and white. The truth is that I grow these plants because I like them and I know they will create a gentle wafty atmosphere in my tiny London garden. I dislike cannas and I’m not sure growing them would make me any younger, probably just crosser for a season, before I reverted to my tried and tested favourites.

I don’t think that total change is the answer, but perhaps a few additions which will shake up the garden a bit is what is called for. Plants that I haven’t grown before in a new range of colours. Parker’s catalogue has arrived and I went through it deliberately concentrating on the oranges and reds. The result is that, along with my usual cosmos, scabious and lobelia I have also ordered the following:

Crocosmia ‘Emily McKenzie’: this is daintier than the brash red ‘Lucifer’ which somehow got into my garden a few years ago and clashes with everything. I love Lucifer’s arching stems and the red and yellow buds so I hope this second crocosmia will act as a good companion.

Alstroemeria aurea ‘Orange King’: According to the description this cultivar has ‘marigold orange flowers, blotched buttercup yellow and striped purple-violet’. That should shake up my pastel colour scheme.

Bidens ‘Hawaiian Flare Orange Drop’: This forms a compact bush with flowers which have red petals with orange tips. I hope these will form good bright clumps.

Thunbergia alata ‘Orange Beauty’: I have never grown black-eyed Susan (T. alata) as I felt the yellow flowers wouldn’t show up against the white walls that surround my garden. This cultivar has deep orange flowers which would show up against anything.

Of course this will all depend on the plants behaving as they are described in the catalogue, but I have high hopes for a brightly-coloured summer. 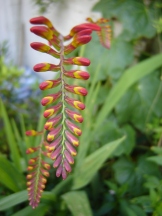 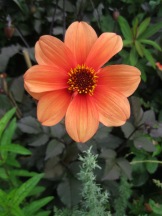