Last Thursday the Garden Museum held a private view to celebrate the opening of its new exhibition “Gnome and Away”. As well as an opportunity to thank so many who had helped the Museum and a platform to showcase its future strategy, the party provided a first  opportunity to see, and for well wishers to adopt, many of the fascinating objects in its collection that are not normally on public display. These will all be packed away when the Museum temporarily closes for redevelopment at the end of October, next to be seen in early 2017 when it re-opens.

Exhibits included the famous “Vegetable lamb” – in fact an amazingly lamb-like rhizome of the fern Cibotium barometz  . There was a pair of pony boots to protect a lawn as their wearer pulled a mower. A collection of old gardening implements hung in an installation that would have been worthy of Damien Hirst (overheard from a very artistic looking attendee “If that had been of farm animals it would have been called Bacon Factory 1 and priced at £5 million”). Equally fascinating was an album of pressed flowers gathered from the bomb sites of London, whose creator is as yet unknown.

The Director, Christopher Woodward, pointed out that garden history represents a hugely underdeveloped and exciting field which will benefit enormously from additional resources. Despite generous donations, more money is still needed and the object adoption scheme is one aspect of the campaign to raise it.

You can see the range of objects available, some of which can still be adopted in the slideshow at the end of this piece. As the Museum points out there are benefits, beyond the warm glow of having helped a very deserving cause, to adoption including:

Jane has already mentioned the Museum’s redevelopment plans to become a significant centre of excellence in its field but they are well worth recapping. The £6.6 million redevelopment will deliver major improvements. Dow Jones Architects, who designed the original 2008 alterations and display scheme within the fabric of the church, have also undertaken the new design, which gained full planning permission last year.

The scheme will comprise both works within the shell of the existing church buildings and a range of new buildings constructed around the churchyard, which will be rafted over in order to avoid disturbing the ground and the archaeology. The new work will be partially clad in copper sheet, which will be lacquered to preserve its colour and texture and should provide an effective contrast to the other materials. Despite heroic efforts the existing building services and infrastructure are severely challenged, almost to the point of breaking down. The new scheme will also supply the modern loos, drains, electricity and other essential services that are so urgently needed.

The display area and facilities are to be greatly enlarged so many fascinating items may be seen for the first time. A recreation of John Tradescant’s Ark or cabinet of curiosities will be displayed for the first time and will form the centrepiece of the extended display facilities as well as telling the story of this fascinating family of seventeenth century gardeners. Generous loans from the Ashmolean Museum, where so much of Tradescant’s collection was eventually deposited, will provide much of the material involved. 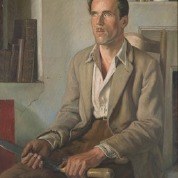 The archive facilities will properly developed so the many valuable donations the Museum has received, including the important recent bequest of Russell Page’s plans and documents, can be properly stored, catalogued, conserved and consulted. The archive will also provide the material for occasional exhibitions and changing displays. Its generous founding deposits included material from John Brookes, Beth Chatto, Penelope Hobhouse and images from Andrew Lawson.

Two lightweight pavilions will be constructed for educational purposes: one for small study groups and one for schools.

The third pavilion will contain the new cafe, which will then be accessible from the road as well as from the museum. Since the food in the existing one is already known to be rather good, despite severe restrictions on essential services and preparation space, its generously equipped successor should be even better.

The exhibition is well worth seeing. The new extension should be fantastic and if you have some spare cash, I can think of no more deserving or interesting cause than supporting the Museum, whether through its adoption scheme (http://www.gardenmuseum.org.uk/page/adoption-scheme) or otherwise.