Midhurst in West Sussex is a charming town, conveniently placed for an early elevenses stop on the way to the seaside at West Wittering. There is a nice bookshop, an Aladdin’s Cave hardware store and lots of cafés. The Vintage Tearoom is particularly good, serving crumpets, cupcakes and much more on dainty, mis-matched china. Our cupcakes were Sticky Toffee and Chocolate, but I’m afraid they were eaten before I thought of taking a picture.

What I hadn’t known, until yesterday, is that Midhurst is also home to one of the prettiest walled gardens that I have ever seen. Hidden, a little back from the main street, are Cowdray Ruins, the remains of a grand Tudor house. In its day, the house boasted visits from Henry VIII and Elizabeth I, Robert May as its chef in the 1630s and Capability Brown as its garden designer in the 1770s. Unfortunately in 1793 the house was largely destroyed by fire. The ruins are splendid, but what caught our attention was a little sign saying ‘Walled Garden this way’.

Behind the converted stables or outbuildings is The Walled Garden at Cowdray; a secret Tudor pleasure garden. It is used for weddings and parties, so presumably at certain times it is closed to the public, but we simply wandered through a couple of deserted reception rooms and came out into the full glory of the garden. Apart from a solitary gardener, it was empty, with a riot of flowers and fruit trees, all vying for our attention. On various websites a café and shop are listed, but neither seemed open when we were there. No matter, the garden is delightful on its own. There is also apparently a £3.50 entrance charge, we saw no sign of this either, although I would happily have paid as the garden is worth much more. The day we visited was cloudy and rather misty, but the garden was still enchanting.

In 2001 Jan Howard of Room in the Garden discovered the ruined garden and by 2005 the restoration was complete. It is laid out as a Tudor pleasure garden, with a central lawn, walkways, pools and beds bursting with colour. There are immense drifts of Verbena bonariensis, engulfing stone lions and stately yellow verbascums, but in a light, airy manner.

There is a little orchard and lots of roses, most of which were past their best, but it really didn’t matter, they were still lovely. Dotted round the garden are seats which look as if they have escaped from Alice in Wonderland; a turf bench, two ornate, metal rocking chairs and a host of others that manage to be quirky, charming and comfortable.

The plant supports are mostly rusty metal and they too have a character of their own – there are arches with giant thistles poking through, obelisks festooned with clematis and one or two pieces that are simply interesting in their own right.

There are neatly trained apple trees, laden with fruit and bed after bed of lovely flowers. In one there were clumps of particularly pretty pink and white cornflowers, far more attractive than the ones I have grown. 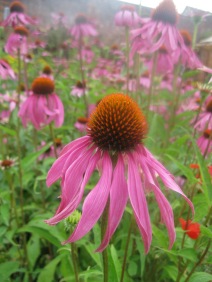 The garden was quiet and peaceful when we were there, but it is clearly a perfect place to hold a party. There is floodlighting and lanterns with tea lights along all the paths and it must look magical at night. As we left we saw a solitary wine glass; the only evidence that revelry had taken place. Jane.