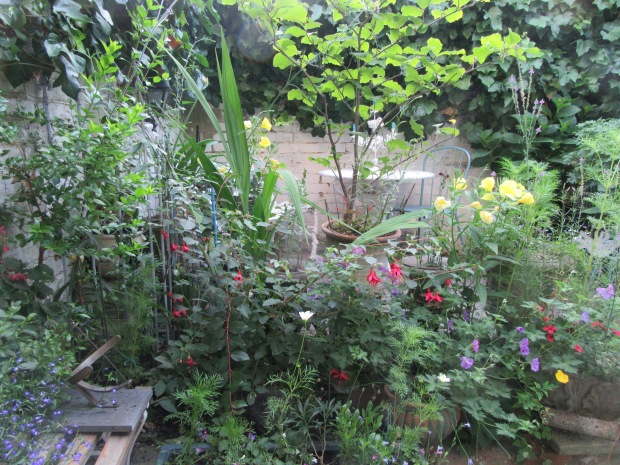 My garden is looking particularly good at the moment, possibly because I don’t have a lawn. A combination of this year’s weather and a more judicious system of watering and feeding the pots (not my usual ‘oh help, it’s gone droopy – I must water’) has meant that everything has bloomed beautifully. My summerhouse was swathed in roses, the windows are screened with charming wafty grasses and there are cosmos everywhere. With the addition of a tap (it’s only taken eighteen years), even the front garden is looking green and pleasantly jungly. 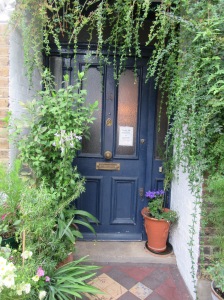 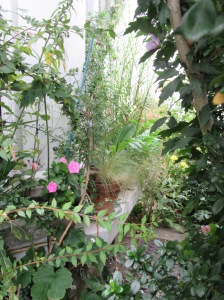 The most noticeable feature of many large gardens at the moment, even after the recent rain, is a huge patch of brown grass. Fulham Palace, where I do most of my writing in the summer, is surrounded by a sea of parched lawn that is only just beginning to regain its green and Putney Common, where I pick blackberries, resembles the African Savannah. I know, once autumn sets in, the grass will recover but, for me, a proper British summer should include lush lawns. Thinking about lawns made me realise that they were what initially made me interested in gardening.

I must have been about five years old when I noticed that there was something wrong with our lawn. Other lawns, particularly those at large houses with cafes and shops attached had stripes. Beautiful straight lines which gave the grass a colour and texture that was singularly lacking in ours. When I asked my parents I was told, ‘Ours is rough grass for you to play on.’ My father added slightly more detail telling me that our lawn was full of weeds and that you needed a special mower to create stripes.

I knew about ‘weeds’; they were the evil plants that grew up in between the roses and had to be pulled up, in their entirety. I looked at our lawn; the non-grass plants mostly seemed to be daisies, buttercups and dandelions. These were useful for necklaces, determining whether someone liked butter and telling the time, so they clearly had to stay. I wasn’t sure I’d ever seen stripes and flowers combined but it conjured up a charming image. Also it was clear that digging all the non-grass up would leave a lot of holes and very little lawn. I decided to compromise on the weeds and concentrate on the mower; my parents clearly had the wrong type of machine. My birthday was approaching, so I asked for a lawn mower, being careful to specify that I needed a ‘proper’ one. Delighted, my parents complied – clearly seeing a future in which their small daughter did all the grass cutting.

On the day I was presented with a huge package encased in yards of paper secured with a large bow. On inspection the mower seemed perfect. These were the days before health and safety and my mower was sturdily built of metal, with satisfactorily sharp rotating blades, a detachable metal grass collector at the front and the all-important roller. The grass had been left uncut and I immediately set about creating the perfect lawn, pausing only at the end of each row for a mouthful of birthday cake. The machine cut beautifully, the grass collector filled with sweet-smelling clippings and I envisaged a green sward worthy of the grandest county house. When I’d finished I surveyed the results; the grass was reasonably even and, in places, there were stripes of a sort but it was not the manicured look I’d been expecting. Parental praise and more cake eased the situation but I realised I was going to have to do further research.

Our neighbour’s lawn was flat, pristine and stripey. It was smaller than ours and seemed to occupy all his waking hours but I was undaunted. A little questioning revealed that along with getting rid of the weeds and having the correct mower, I also needed to roll the lawn to make it flat. I’d dealt with the first two problems; well, ignored one and dealt with the other, so I reasoned I’d better now solve the rolling. I looked critically at our lawn and realised it was a bit hummocky. The good news was I knew we already had a roller so I wouldn’t need to wait for another birthday.

Like so many rollers ours languished behind the shed. It looked suspiciously as if it had last been used in the nineteenth century. I cleared away the weeds and surveyed the tool that was going to transform our garden. At first glance I had to admit that it didn’t look promising; there seemed to be a lot of rust, part of the handle was missing and the remainder seemed stuck at a slightly odd angle. Undeterred I washed it and, with a surprisingly gentle push, seemed to straighten the handle. I went to inform my father that I needed his brute strength, at least to get me going. Once started I was reasonably confident I could manage the roller (no, I was not possessed of superhuman strength, merely blissfully unaware of the weight of a rusty Victorian roller). Not terribly keen at the prospect of having his cricket-watching afternoon ruined my father merrily told me we didn’t have a working roller. ‘Oh yes we do,’ I countered, ‘And I’ve washed and fixed it.’ Washed and fixed was not a particularly accurate description of the soap-sudded, rust-encrusted monster that greeted my Dad but some oil and a bit of wood to mend the handle transformed it into an almost satisfactory roller. At this point my parents still clearly thought that a little outlay of effort now would be repaid with a lifetime of beautifully cut grass.

The roller did improve things, although my role was rarely anything more than foreman, directing the now-involved neighbour and my Dad up and down over the worst bumps. By this stage everyone had caught my enthusiasm and the worst of the weeds were removed and replaced with patches of turf. Slowly the area of rough grass began to resemble a lawn. A summer of dedicated lawn care followed, much to the amazement of my parents who had seen other fads come and go. I fed and, when necessary, watered the grass. I marked areas that were ‘not to be walked on’ while the turves settle in. Gradually the ground levelled, the weeds diminished and the grass improved. The final breakthrough came with our refined mowing technique; I went first cutting the grass and Dad followed, creating the all-important stripes which, it turned out, were achievable with our mower. By the end of the summer we had a perfect lawn.

The following year the mowing regime eased slightly and I broadened my horizons and turned my attention to the flower beds. With time I have learnt a more relaxed approach is often better.