My old friend Nick Wain very kindly took me to the Van Gogh exhibition at Tate Britain. All his paintings were very good and the best superb, the Starry Night especially. However, with the exception of the three fine, but typically tormented, Francis Bacons at the end of the exhibition, the works claimed for his British followers fell far short of the standards he set.

Yet, removed from direct comparison with Van Gogh’s own output, most people would have loved to own even the weakest of them. The problem is that the bar is set almost impossibly high.This becomes even more painfully obvious when one attempts to produce anything in his manner oneself.

Trees and avenues were a common subject. Tate state, evidenced by letters between him and his brother Theo, that these were initially inspired by Hobbema’s painting The Avenue at Middelharnis (below) that he had seen in the National Gallery during his stay in England in the 1870s.

Many showed formal avenues with clear paths or roads running through them. Van Gogh was a great walker, on occasion covering more than twenty miles a day,  and the images provide an obvious metaphor for physical and psychological journeys through life.

As his health deteriorated and his art became ever more emotionally charged so the colours, brushwork and forms became ever more intense and psychologically charged. The straightforward paths became more convoluted and eventually the figures became lost with little hope of finding a way forward.

These apparently straightforward paintings are impossible to in any way copy but still provide plenty of inspiration so I decided to focus the rest of the week on drawings and paintings of groups of trees with figures on a path.  Today’s is a quick charcoal drawing that I hope to develop into a couple of oils as the week progresses. 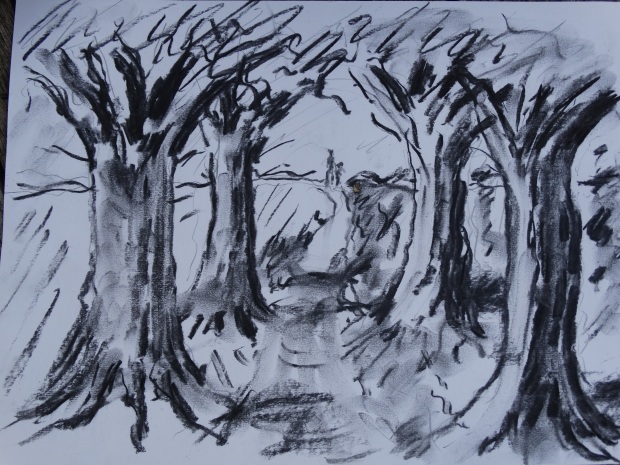