Last month I wrote about de Jaeger bulbs. Most of my bulbs have now flowered and I am convinced; they are the place to buy bulbs. Hardly any blind ones and only a couple of short, weedy ones and the flowers have lasted brilliantly. The purple tulips (Passinale and Negrita) lasted for ages and then faded gracefully, as did Spring Green. The parrot tulips were stunning as individual flowers but I bought a mixed pack, which I think was a mistake. They came up at very different heights and, if I’m honest, looked a bit of a mess. Next year I’ll just choose one cultivar, probably Estella Rijnveld, which I love for its name as much as for its crazy red, white and green petals. I have no idea who the original Estella was and a hunt on the internet has revealed that the tulips are also sometimes called Gay Presto, which I think suits them rather well. 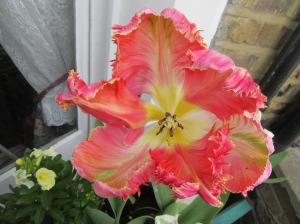 The miniature daffs (Minnow and Rip Van Winkle) were lovely and the taller daffs (Jonquilla Lieke) lasted well. My only slight quibble with the tall daffs was that they hung their heads a bit but Sarah, my neighbour, pointed out that they probably did that so Matilda, the cat, got a better view of them.

The undoubted stars are still Allium cowanii. They have weaved their way between other plants, are the most beautiful pure white and last for ages. And they were a bargain. I think they look best in raised containers in between dark green evergreens which contrast against the pure white and hide the rather messy leaves. I squashed the bulbs around little hebes in a window box and the end result was (more by good luck than good management) completely perfect.

If the cat has a fault, it is that she eats grass. 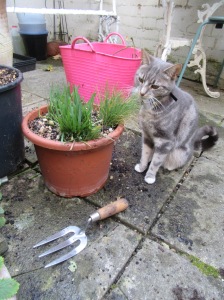 Not ordinary lawn grass, I could forgive that, but my pretty ornamental ones. Two years ago she kept my Imperator rubra neatly trimmed to two inches. I moved the grasses to the front garden (where she wasn’t allowed) and they flourished. This spring I thought the imperator was slow to get going and then I saw Matilda, on the front window sill, neatly biting it back to the required two inches. Slightly embarrassingly, my neighbour’s grass has ‘stopped growing’ too. I tried to blame too much/too little water/sun/nutrients but then Matilda was caught red-pawed tucking in. Adopting a stick and carrot approach I sprinkled pepper on the forbidden plants and bought Matilda her own grasses. The nursery was waiting for Imperator so I bought Briza media Limouzi and Festuca glauca Intense Blue. So far the plan seems to be working although I hope Matilda gives the plants time to settle in before she trims them too rigorously.

And even though most of my pots were still empty, and the ivy slightly out of control, I had breakfast in the garden, several times. 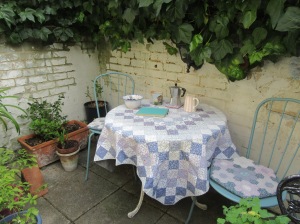