Lizzie Collins of Zuleika Gallery (https://zuleikagallery.com/), located at 6 Mason’s Yard, specialises in good emerging and contemporary art and is a discovery. Occupying one room at the top of quite a few flights of stairs, it’s well worth the climb. The name incidentally comes from Max Beerbohm’s Zuleika Dobson: For people who like that kind of thing, that is the kind of thing they like.

It is currently showing the works of Andy Barker, who for 22 years was Howard Hodgkin’s studio assistant and was there last night for the private view, when we had a quick talk. He is courteous and friendly, slightly reserved but not shy and quite cerebral without being drily academic. He described working for Hodgkin as the best job in the whole world, when I only didn’t come in for perhaps two or three days during the entire period. Clearly possessed of considerable energy and focus, he got up at five o’clock most mornings in order to produce his own work before getting on with the day job. By mutual consent they never discussed each other’s paintings, although Hodgkin was obviously supportive of what he was doing and held it in high regard.

The paintings are in every sense very “layered” and full of associations and connections as well as containing multiple images and evoking quite a range of sensations. Their titles are frequently of Indian and South American subjects and the opportunity to travel with Hodgkin for several months of the year obviously provided initial subject matter and input for the works. They are largely constructed using oil paint and collage on wood but apart from the superficial similarity of being quite bright, are actually very different from Hodgkin’s work, which despite its apparently abstract appearance was in fact focused on the recall, at an emotional and sensory level, of very specific events in time and place.

Andy’s stated interests include the whole treatment of the picture plane and the influence of early Italian art, especially Boticelli, Simone Martini, and Ambrogio and Paolo Loronzetti. We talked about the way in which these artists constructed space and perspective on the picture plane and moving towards articulating it in a way where objects could exist in separate groupings, more linked by rhythm than a single coherent space – think for example of Boticelli’s Primavera. This is not well expressed but the image below gives you some idea of how they are.

Digital images don’t really fully convey what these pictures are like. Much better to go along if you’re in London and make your own mind up. The gallery is friendly and unpressured. You should obviously never buy anything unless you really want it, have a space for it and can afford it. However, these are priced between the mid thousands to lower tens of thousands of pounds,  in a way that reflects the previously very low profile of the artist rather than the inherent quality of the work. While buying for investment is a complete mug’s game I suspect these prices may turn out to seem cheap in a few years’ time.

In Paraná, It All Happened Too Fast!, 2007, oil and collage on wood 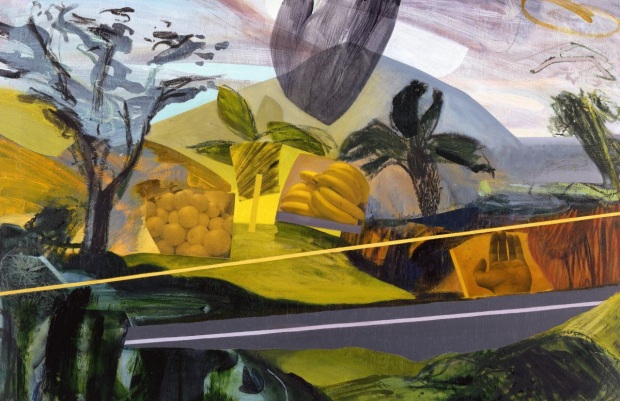