The Garden Museum (https://gardenmuseum.org.uk) is currently staging a major exhibition devoted to the life and paintings of Ivon Hitchens which runs until 15th July. It must have taken quite a while to put together and considerable powers of persuasion to obtain so many high quality loans.  The show covers the whole of his career but has  a particular emphasis on his output during the period after his London home was bombed in 1940 and his consequent move to some six acres of woodland in West Sussex, where he and his family lived firstly in a caravan and subsequently in a slightly ramshackle and home-built house.

Art exhibitions here seem to fall into two distinct categories. The first is of competent but specialised horticultural artists or illustrators who succeed in showing what is in front of them and these naturally hold most appeal to the Museum’s core membership while giving great pleasure in the process. The second, of which this and a previous show of Cedric Morris’s work are fine examples, is of art which transcends its subject, appeals to a wider audience and may well be the subject of exhibitions in major London galleries: Morris’s work for example was exhibited by Philip Mould at the same time as the Museum’s show.

Hitchens certainly took nature and his surroundings as a starting point and often painted flowers, but he was no mere florist or botanical illustrator. His output never entirely lost its representational qualities, but he was undoubtedly a modernist at heart, without ever becoming a totally abstract, as opposed to abstracted, painter. Nonetheless his background and training meant that the formal qualities of his art, and especially the ability to use colour as a way of transcending  the two dimensional limitations of his canvas, often came to outweigh the original subject matter. He had studied at the Royal Academy Schools and then played a major part in London’s artistic community before the Second World War. The Museum points out that he was a key member of the Seven and Five Society, who were famous for holding the first ever all abstract exhibition in Britain. The society also included Ben Nicholson, Barbara Hepworth, Henry Moore and artist plantsman Cedric Morris.

He tends towards abstraction of form, and certainly doesn’t do hard edges. He implies far more than he paints creating moods and atmospheres ranging from the dreamy to the sinister. His Tangled Pool from 1946, below, is a better demonstration of this point than any verbal analysis. For all the blurring of his subjects on the canvas he is superb at showing the fall of light on surfaces of different shapes and textures and produces a sense of solidity without in any way mimicking what he chose to paint. The detail of a Figure in a Landscape, below,  shows his rendering of an arm in a totally “unrealistic” green paint that still most satisfactorily conveys the sense of muscular tension and the pattern of light as the hand grasps and the arm supports what might be a vase, or perhaps even a paper.

His greatest artistic achievement though, one his many imitators and followers fail to match, is to use colour in a way that is both “musical” (a declared aim of his art) and also creates a strong sense of depth in the picture plane. The relationships between, and the advance and recession of, the colours themselves are the agents of the works’ impact on the senses, perceptions and feelings of his viewers.  His Poppies in a Green Bowl of 1930 have the reds advancing towards you, while the blues recede into an undefined whiteness of light filled space. In a painting of lilies of similar vintage, the orange-red anthers of the flower almost seem to jump out at you and to exist in front of the picture plane. Of course good artist have always understood this but this work was made twenty years before the first of Josef Albers’ Homage to the Square series and there is certainly nothing simplistic or naive about these paintings.

If you’re a member of the Garden Museum, or a fan of Hitchens’ work, or just in the area, then this is an exhibition very well worth seeing. Although its facilities are greatly improved, the Museum has admittedly lost some of its previous and almost rustic charm after its recent makeover.  However it is very well worth supporting. Even if the restaurant has positioned itself in a price range that makes lunch a much more costly treat, you can still enjoy reasonably priced coffee and cakes while sitting comfortably and looking through into the fascinating surrounding spaces. 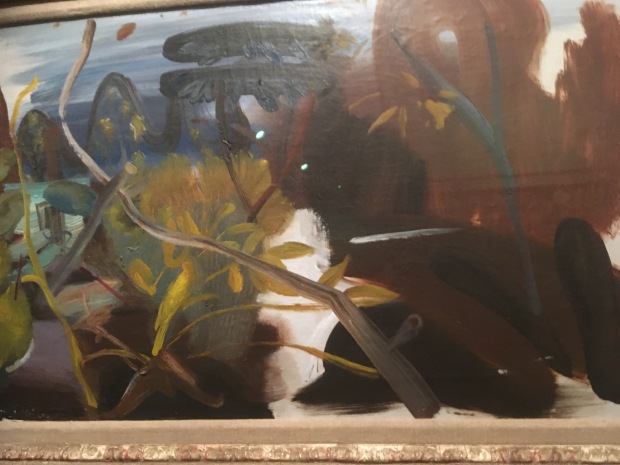 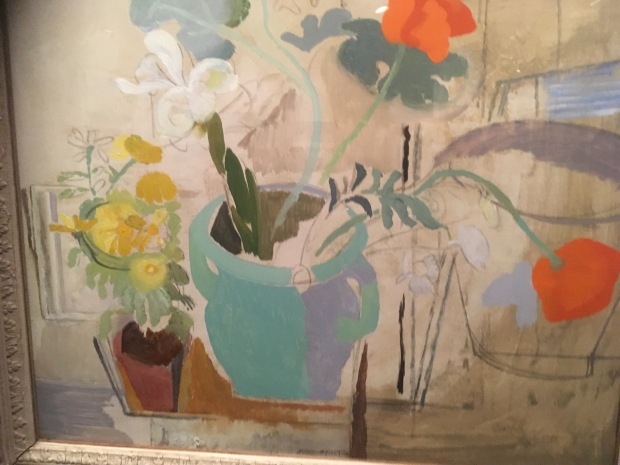 Detail of figure in a garden 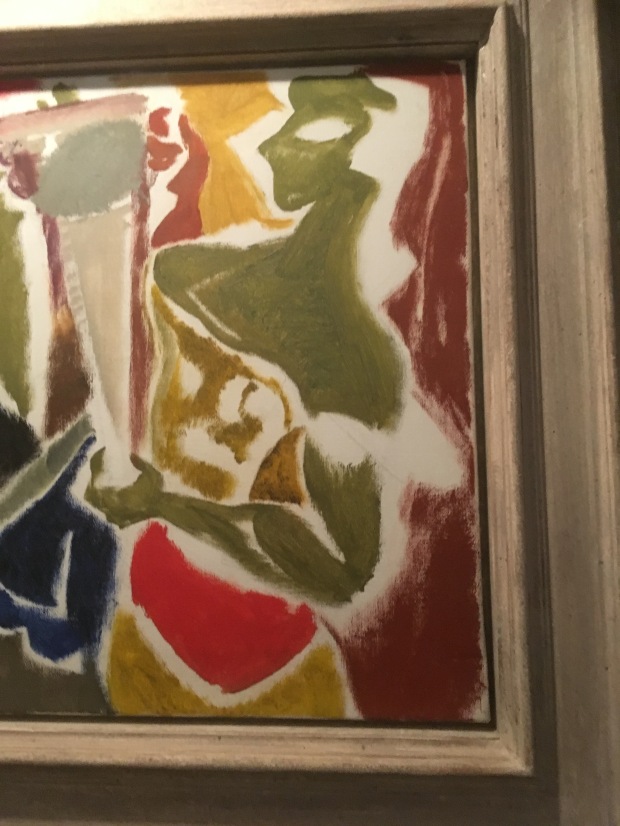