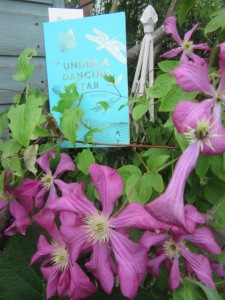 The stars in the title are those that shine down on the Italian countryside, watching over people dining at long wooden tables, beneath vines and bougainvillea (yes, I know the photo is clematis but it’s the nearest I can manage in my Fulham garden). This is the image Under a Dancing Star by Laura Wood conjures up. Set in 1933 it opens with Beatrice, the seventeen-year-old star of the book, up to her knees in mud. She is studying glow worms but this is not suitable behaviour for a young lady. She lives at Langton Hall, ‘a crumbling Gothic monstrosity’ and her parents are desperate that she should ‘marry well’ so the family home can be saved. But Beatrice has other ideas; she is passionately interested in science and would love to explore the world and even get a job (remember this is 1933) rather than simply be married off to the nearest available rich young man.

In an attempt to tame their daughter, her parents send her to spend the summer with Uncle Leo in Italy. The last time they saw him he was a strict, formal man, married to Aunt Thea, upright, formidable and very correct. Aunt Thea has died but he is about to marry a respectable widow. What they don’t realise is that Filomena, the respectable widow, is a delightfully free-thinking sculptress who has brought out the bohemian side of Leo and filled the house with writers and artists, including Ben, one of the most charming young men in fiction. Bea blossoms in the unconventional atmosphere, learning to mix her beloved science with an understanding of art and an appreciation of life in general. It’s a funny, moving book that takes a lot of inspiration from Shakespeare’s Much Ado About Nothing and is an ideal read for a warm summer’s evening.

I’m only a third of the way through but this was perfect as almost the last book I’m going to buy ‘for some time’. It is a combination of Frances Hodgson Burnett’s The Secret Garden, Elizabeth von Arnim’s The Enchanted April and Dodie Smith’s I Capture the Castle, three of my favourite books. I just need to ensure that Hatchards has a plentiful supply of Under a Dancing Star and buy Laura Wood’s earlier book, A Sky Painted Gold.

Boats eleven to sixteen have become a mobile. I’d like to have lots of boats hanging round the house gently wafting in the breeze (this will work well even in winter as the windows don’t fit very well). The success of the plan will depend slightly on what Matilda the cat thinks of them. She has a tendency to launch herself at interesting-looking objects with little thought for the consequences, which could be unfortunate both for her and the boats. 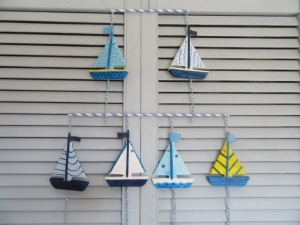 These books should be easily available at ‘all good bookshops’, please buy them there, if you can, rather than from a characterless online site.