The most comprehensive and critically important show of Ivon Hitchen’s work for some thirty years runs until 13th October at the Pallant House Gallery in Chichester. He was painting from the time of the First World War until close to his death in 1979 and over seventy works covering the whole of his career are shown on a chronological basis, supported by an extensive analytical and critical approach to a very well loved artist so often seen primarily as a “semi-abstract”nature or flower painter. Although not actually untrue this view considerably diminishes Hitchens, an outstanding artist  who continued to develop and innovate throughout his long life.

The son of a painter and trained at the Royal Academy Schools after his education at Bedales, Hitchens was very much part of the London art scene in the twenties and thirties, being for example a member of the Seven and Five Group along with Hepworth, Moore and Nicholson. During this formative inter-war period he was exposed to, and gradually assimilated, influences from the major artists of his time. His retreat to the Sussex countryside only took place after his house was destroyed by bombing at the start of the Second World War.

Cezanne and Braque played a vital part in his development of form while his use of pigment was hugely influenced by Matisse, who once stated “with colour one obtains an energy that seems to stem from witchcraft”. Hitchens used abbreviated fields of colour in place of of precise images, often accompanied by the use of a panoramic depictions, often adopting a wide horizontal format from the later 1930s onward.

The exhibition focuses on his use of colour to create space and depth. Of course anyone who has ever been told to paint a landscape knows how distant hills are both bluer and paler than nearby details, and how reds tend to jump out at you from the canvas; but this is something way beyond such elementary concepts. Hitchens’ colour suggests space and articulates his painting within the imagined volumes of the picture plane. The relationships between different areas, shapes and intensities of colour suggest musical or harmonic relationships between the different pigments. Thus, and by the composition of his images, he transcends realism. Nonetheless he almost always began with a particular location, whether clearly recognisable or simply alluded to in the final work.

The show can be bench-marked around three paintings: the “Curved Barn” of 1922, the long horizontal format “Winter Stage” of 1936 and, as an example of his late style, his “Sussex Canal” of 1972.

The “Curved Barn”, above, shows the literary influence of Roger Fry and Clive Bell and the then new concept of “significant form”. Barn, tree and landscape alike are carved into a series of undulating and twisting form while the colours used support these distortions of form and help create an almost theatrical sense of movement. The planes of the painting appear to sometimes fight and sometimes agree with each other, even giving the impression that the obviously static barn would like to spring into action and start moving through its woodland setting.

By 1936 Hitchens had not only absorbed the influence of Braque, Picasso and Matisse but also begun to develop a style and a format that helped him to express a sense of place and develop the “musical” inter-relationships within his painting. “Winter Stage”, painted that year when he was staying at the home of his patrons Mr and Mrs Cecil Harris, represents a view of the grounds from the loggia of their house. Hitchens uses an extended landscape format to connect five different but linked scenes. The painting is best read from left to right. In his Notes on Painting of 1940 Hitchens explained his methods “Using as instruments in one’s orchestra, each to be heard separately yet all in unity, line, form, plane, shape, tone, notan [a Japanese principle of laying light against dark], colour; warm, cool, recession, progression, softness, sharpness, crowdedness, emptiness, up and down, side to side, curves and straights, and any other pairs of opposites, ordering these in transition, opposition, repetition, symmetry and balance’  The painting was recognised as highly significant at the time and purchased by the Contemporary Art Society who presented it to the Tate. 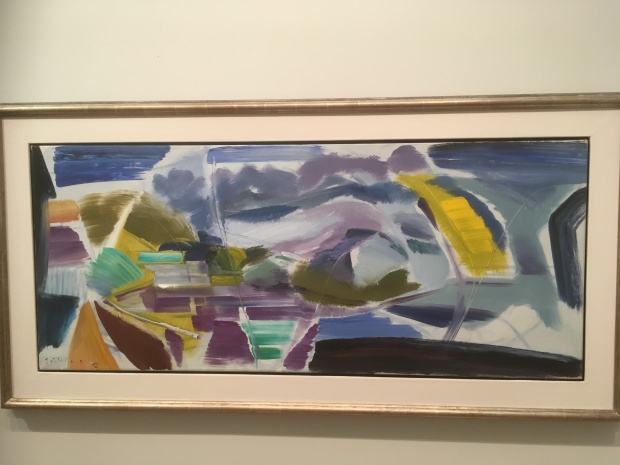 By the 1970’s Hitchens’ work was more abstract, although still grounded in the natural world and continuing  his characteristic long format. In his “Sussex Canal” of 1972, above, his colours are brighter and more primary. Connected planes of colour suggest recession and movement within the natural world despite increasing abstraction.

This show is an overdue and an excellent exploration of Hitchens’ life and work. It’s well worth spending a couple of hours there if you are within driving distance of Chichester. (https://pallant.org.uk › whats-on › ivon-hitchens-space-through-colour).