Yesterday I had a really pleasant surprise. Taking the Victoria Line to Highbury and Islington and walking for a few minutes to Canonbury Square, brought me to the Estorick Collection (https://www.estorickcollection.com) which occupies a fine Georgian house at number 39a. This is one of those galleries everyone has heard of and no-one visits, which is a shame and a mistake. It’s definitely worth the detour. If you are interested in the Italian Futurists, or more generally 20th Century Italian art, then you really ought, indeed probably need, to go.

The key plus points are the excellent permanent collection and thoroughly good and unusual exhibitions. The incidental plus points include a lovely setting, a warm welcome and the probably unfortunate fact it’s very quiet and there is nobody breathing over your shoulder or getting between you and the art.  There is also a very good and reasonably priced cafe serving Italian food that transcends the normal expectations of gallery catering. I ate home-made penne con tonno and drank a good glass of Chianti  for a little over £12.

The foundation was set up by the late Eric Estorick, who possessed a remarkable eye and assembled the permanent collection while making a profitable success of his lifelong devotion to the art of this period at the Grosvenor Gallery. There are works by virtually every significant Italian  artist from the 1890s to the 1950s. Lottery funding played a significant role in the renovation of the building.

Of the two exhibitions currently running, the first, Lithographs from Leningrad, is a remarkable selection of high quality images, many printed in colours and just not what one would have expected from a supposedly tightly controlled Soviet art establishment! However, the other, and probably more important, is Umberto Boccioni: Recreating the Lost Sculptures.

The gallery website states of the lithographs: During the early 1960s, when Eric Estorick (1913-1993) was running London’s Grosvenor Gallery, he developed a strong interest in Soviet art alongside his passion for modern Italian painting. In 1961 he mounted a landmark exhibition of Soviet prints – the inspiration for this special display – which features graphic works by 15 of the artists from the original show: Brodsky, Ermolaev, Izrailevich, Kaplan, Kuks, Lanin, Latash, Maslennikova, Matyukh, Nemenova, Skulyari, Steinberg, Vasnetsov, Vedernikov and Yakobson. This is the first time since 1961 that these artists have been exhibited together in the United Kingdom. Estorick had visited Leningrad’s Experimental Graphics Laboratory in 1960, and was so impressed that he bought several hundred works on the spot. For a number of years his gallery hosted a stream of exhibitions featuring work by artists from the Soviet Union and, for the first time since the Russian Revolution, Westerners were able to see and acquire contemporary art from the USSR.

Of the many ground-breaking sculptures the Futurist artist Umberto Boccioni (1882-1916) created between c.1913 and 1915, only a handful remain in existence today. A number of his most important plaster and mixed-media sculptures were destroyed in 1927 and this constituted a very significant loss for avant-garde art. Using a combination of vintage photographic material and 3D printing techniques, the digital artists Matt Smith and Anders Rådén have recreated four of Boccioni’s destroyed works: a volumetric study of a human face titled Empty and Full Abstracts of a Head, and three of the artist’s iconic striding figures. As the gallery states This ground-breaking display enables modern audiences to ‘see’ these lost masterpieces for the very first time. The exhibition contains a detailed technical exposition of the methodology involved and you can see the 3D printer in action, which is both fascinating and fun.

Both exhibitions close on 22nd December so not much time remains. Next year there will be four new exhibitions, of which the first is Tullio Crali: A Futurist Life, running from 15 January – 11 April 2020. 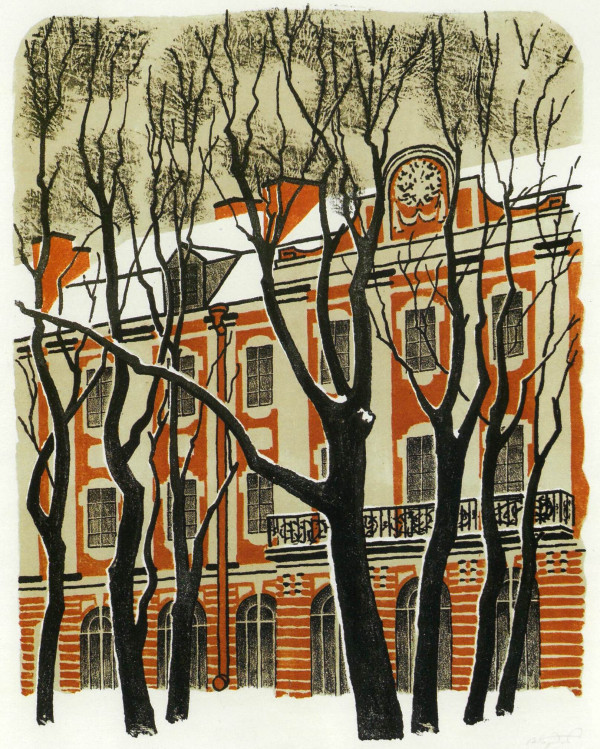