My tulips clashed! I planted Pallada and Negrita together, thinking the colour contrasts would be interesting. Yes, interesting but not in a good way. I’d moved the pot so I could see it from the window where I work and I kept nearly going out and cutting the Pallada to have in a vase in the house. They were very different heights which eased the situation slightly but I shall be more careful next year. They would have looked perfect with something like Princess Irene in between. All was forgiven when they fully opened as their insides were so beautiful.

Partly because the bulbs from de Jager are so reliable and partly because (apart from the aforementioned tulips) I chose carefully, I have achieved succession planting this spring. The daffs came and went, lasting well over three months with Tete-a-Tete, Minnow, a mix of trumpets and Jonquilla Lieke following each other.

Most of the second half of the month was more like summer. Which, in these times of lockdown, made me appreciate my space outside even more. I sat in the garden and realised that the ‘from my window’ may need to become ‘from a seat in the garden’. As I’ve mentioned before my garden is tiny but has five different seating areas: a table and chairs in the sun, ditto in the shade, a bench for elevenses in the sun, a bench for afternoon shade and a summerhouse with a desk and chair which gets the late afternoon sun. Surprisingly I also have room for about forty-three pots, urns and troughs plus a further twenty in the front garden.  I’ve planted these with summer bulbs (crocosmia, galtonia, gladioli, Dutch irises and liatris) and, in the interests of the times and economy I’ve planted more seeds: a selection of sunflowers, most of which were well past their ‘best before’ date, and some baby cucumbers. I’ve also divided my herbs and a Chinese foxglove which Chris gave me years ago and has now grown into eight plants. The opium poppies which germinated last month are refusing to grow – I think the problem may be that I’m moving them in and out so they get light and fresh air but subjecting them to changes in temperature. 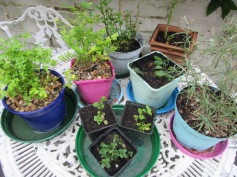 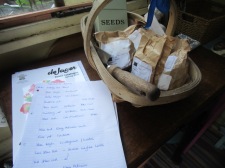 The self-seeded Welsh poppies on the other hand, are doing brilliantly; delicate papery yellow and orange flowers popping up all over the garden. I particularly love the sight of the sun shining through the petals. The Allium cowanii weaved their way through everything and the very old rose in the front garden flowered. Even the roses I brought from David Austin last year have buds. 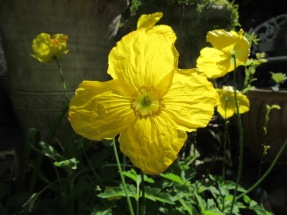 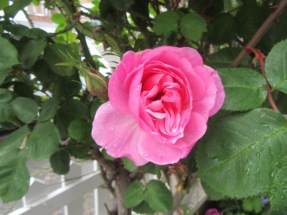 With all that is going on, it is good to have plants happily growing as if all was well.