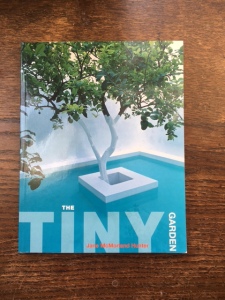 Of course this isn’t an accurate birthday but thirteen years ago my book The Tiny Garden came out in paperback and this witch hazel came into the garden. At the time I expected the witch hazel to outgrow its space within a few years but it has behaved with impeccable, if surprising, restraint and grown to exactly fit the space I have for it. 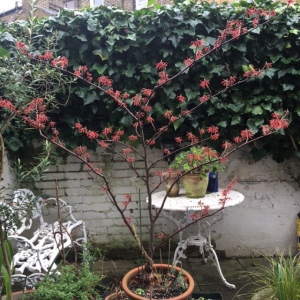 One cold February day I was told by my publishers that Emma Townshend, who wrote for The Independent on Sunday, wanted to come to the house and interview me about the book. Ecstatic, I said ‘Yes, of course, delighted!’ I put the phone down and panicked. She was coming to see my garden . . . . . with a photographer . . . . .in FEBRUARY. I probably shouldn’t admit this but, much as I love my garden, I rarely spend much time in it between November and March other than to plant tulips and prune the roses. The front garden has all the bulbs as that is the part I walk through every day and is also the part I look out onto from my desk. The back garden has nothing. It has ‘structure’ but in February this consists of two sets of tables and chairs, two benches, a summer house and a lot of empty-looking pots. The perennials are all tucked up asleep in the ground and the annuals have yet to be grown. It had been a mild winter so there was still some trailing lobelia, and a few straggly snapdragons but that was about it. 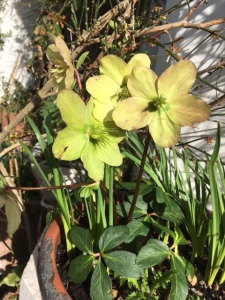 I realised I needed hellebores and perhaps a decent shrub. A newly-bought Christmas box would be too small, Daphne too expensive and, so I thought, witch hazel too large. I made an emergency trip to RHS Wisley to see what they had flowering. Not much else apart from early bulbs. As I wandered round the nursery area I saw a perfect witch hazel, neatly fanned rather than spreading in all directions. It was Hamamelis x intermedia ‘Rubin’ so the scent wouldn’t be great but that didn’t matter as I intended the plant be seen from the kitchen window, forming an airy screen between the main flower bed and the table and chairs beyond. The advice from everyone was that, even in a pot, you shouldn’t try to grow witch hazel in a tiny garden; it would either take over or die.

My ‘Rubin’ has proved everyone wrong. It is now a large fan, providing me with an all-important burst of colour and beauty in late winter, a lovely green screen in summer and another burst of colour in autumn when the leaves turn yellow, orange and russet before they drop, revealing a pretty good structure for the rest of the year.

The hellebore was bought at the same time and, despite its rather indeterminate colour, I’m fond of it. A true survivor, every year it is sat on by tulips in late spring and then smothered by annuals such as cosmos in summer. It lives in a rather unattractive plastic pot which is a useful size but little else to recommend it. I tend to try and hide it in between the front garden fence and the shrubs so the tall flowers are visible but not the pot. A few weeks in February and March are the hellebore’s brief moment of glory. 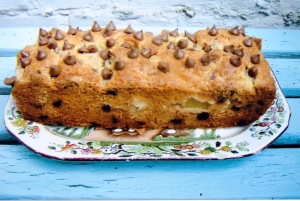 I reasoned that cake would make up for any deficiencies in the garden so I made my stand-by apple and cinnamon loaf cake. It is easy, delicious and can be eaten at elevenses and tea, or with cream as a pudding. The recipe, along with pear and chocolate and cherry and almond variations, is in my book Orchard, written with Chris, and there are more variations with hazelnut and plum or gooseberry and almond in Nuts: Growing and Cooking and Berries: Growing and Cooking respectively, both written with Sally Hughes. The photo is the pear and chocolate variation which is possibly my favourite variation but it needs pears at exactly the correct moment of ripeness – juicy but still firm. 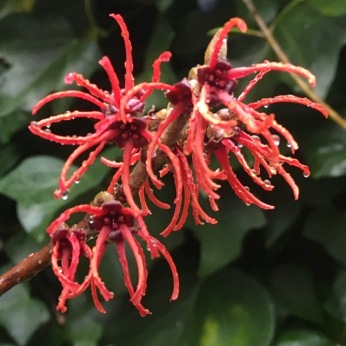 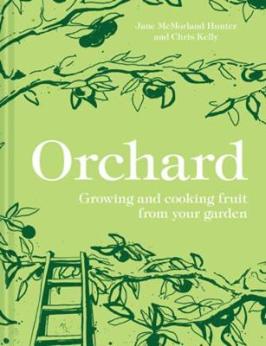 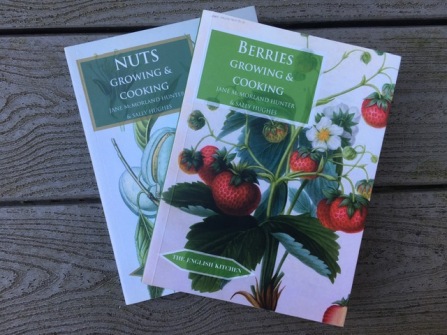 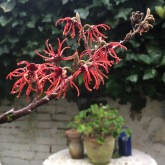 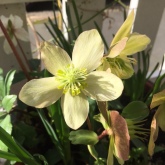 Luckily Emma and Teena Taylor, the photographer, both liked cake and, to my relief, saw the charms of the garden. You can read the article and see the baby witch hazel here.

I would obviously love you to buy any or even all of my books. But from a real bookshop please, once they’ve been swallowed up by the faceless online giant you might miss them.