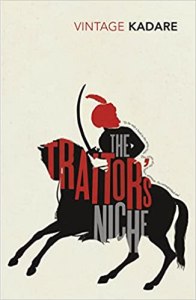 The Traitor’s Niche was first published in Ismail Kadare’s native Albanian in 1978,  but the English translation by John Hodgson did not appear until nearly forty years later. It takes up 200 small pages of large type and in size sits on the borderline between a novel and, as Kadare described it to avoid the censors, a novella. However, there is nothing remotely slight about this work, which is both comical and awful and subverts any idea of the normal. It contains all the surreal apparatus of Kafka but expresses it on a vastly larger stage, matches the dystopia of Orwell but is set in the past, and equals the weirdness of Gogol but without his specifically Russian atmosphere.

The story, and at first sight it appears to be just a story, is set the Ottoman Empire of the early nineteenth century, of which Albania was then a part.  It is structured around the journeys of the imperial courier Tundj Hata and incidents in the lives of those unfortunate enough to come into contact with him. Hata is charged with the safe transport of vital orders and death warrants to the outlying provinces of the Empire, often returning with the decapitated heads of executed traitors, preserved in honey and ice, for eventual display in a high niche in the centre of Istanbul. On his return journeys he presents theatrical displays of the heads in the villages through which he passes and in return for large sums of money, allows the fascinated inhabitants to watch. On arrival in Istanbul the heads terrify and awe the population into subservience.

The Emperor having finally tired of the continual rebellions of Ali Pasha, or Black Ali, the ageing governor of Albania, sends first one general to destroy him and, after his defeat, another who succeeds in his mission but is declared a traitor by his enemies at the imperial court and consequently and like the first pasha, loses his head. Who, of course, but Tundj Hata  should transport these gruesome relics back to Istanbul?

That Istanbul, although in some ways recognisable to those who know it even now, is filled with the mythical apparatus of a totalitarian state that far exceeds even the actual unpleasantness of the later Ottoman Empire. It contains not just the Traitor’s Niche, but the Palace of Dreams, responsible for interpretation of all forms of visions and symbols. The Palace of Caw-Caw is responsible for the total destruction of prohibited cultures and histories, and the ancient Palace of Psst-Psst, responsible for the creation and manipulation of rumours. It is not surprising that much of the book is filled with the dreams, visions, imaginings, recalled memories and associations of the main characters that substitute for any unknowable but objective facts about the state of the Empire. Hata day dreams of the state as a head, wondering to what animal it might belong when that head is situated in the centre of its body. He can only think of an octopus, and once he has done so, “Scared that he might have entertained a sinful thought, he banished the image from his own head”. The next night, Hata reaches out to touch the locks of the severed head he is transporting and “Then everything repeated itself as on the previous night. His brain resembled some clinging creature with the inner luminescence of a glow-worm, whose slime smeared the domes of mosques and mausoleums, banknotes and the wombs of women awaiting insemination.” That distorted persistence of nightmarish memories, while the state seeks to banish all forms of independent thought and action, is one of the underlying and unifying themes of the book.

Kadare’s book, despite its Ottoman setting, constantly references both the history of Albania and the oppressive political regime under which he wrote and whose censors he sought to evade. By the time Hodgson’s translation appeared in 2017, Enver Hoxha’s government had long fallen, leaving the arrays of crumbling concrete fortifications and pill boxes along the coast as little more than a curious memory of his paranoid fear of attack by an unknown and probably unknowable enemy and a tangible symbol of a regime that could express itself only through totalitarian control over the entire state and its inhabitants.

Direct opposition was likely to result in elimination and any form of criticism, whether in literature or otherwise, needed to be carefully disguised to have a  chance of the work, and indeed the author, surviving the apparatus of the state. Accordingly Kadare’s work tended to be distanced in time and place, making full use of political allegory and using the myths, dreams and folk tales found in his writing to create a highly effective mesh of symbols and allusions that represent the control of the state over all forms of individuality, to the extent of eliminating even memory and history.

Read it if you haven’t already, and please try to buy it from an independent bookseller for now, more than ever, they really need your support.